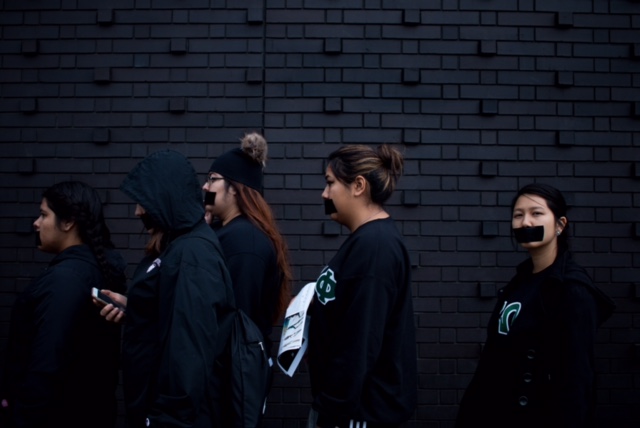 People marched through downtown Chico on Oct. 22 to raise awareness for human trafficking and slavery. A21, a non-profit, nationwide organization that works to abolish human trafficking, hosted a Walk for Freedom that consisted of a mile-long silent protest.

A single-file line of volunteers walked dressed in all black, with black tape over their mouths to symbolize the 27 million victims of human trafficking without a voice.

The line started in the Chico City Plaza and marched through Chico State, ending in the residential area neighboring the school.

A21 gets their name from the phrase “abolish injustice in the 21st century.”

They created the campaign to catch the public’s attention and raise awareness. The ultimate goal of the group and the walk is to encourage people to take action.

The group organized 270 walks which were held in 39 countries worldwide on the same day.

In 2007, A21 realized the need for an outlet to help prevent and ultimately end human trafficking. By the end of 2008, the group opened its first shelter in Thessaloniki, Greece. Its site states, “After extensive research, planning, fundraising, more research and relationship building, we opened our first shelter for survivors of human trafficking.”

A junior Butte College student Maliah Seavey attended in support of the cause.

“I am so humbled to have been a part of this event,” Seavey said. “Human trafficking isn’t just the sex trade. People have become too comfortable with objectifying other humans.”

Kaylie Lewis can be reached at [email protected] or Kaylielewis_ on Twitter.