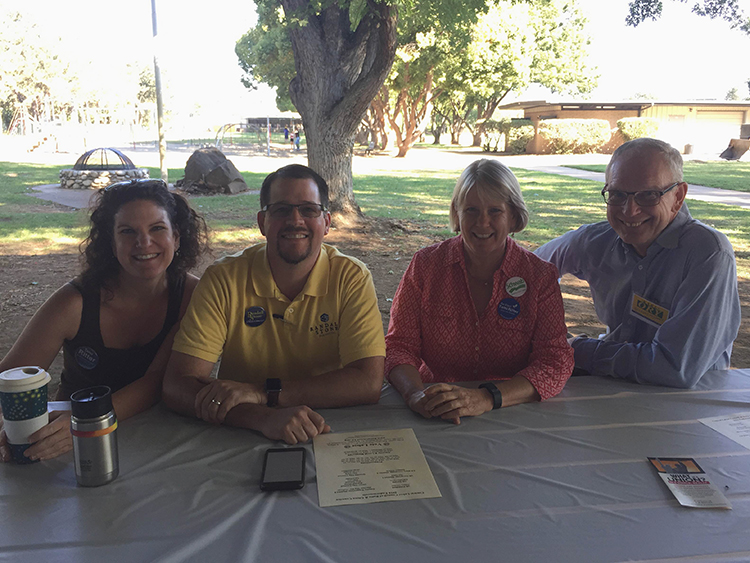 Four members of the Chico City Council are up for re-election this year. Incumbent councilmembers Ann Schwab, Tami Ritter, Randall Stone and Sean Morgan must defend their council seats against seven challengers. Each voter will choose their top four candidates and the four candidates with the highest percentage of overall votes will be elected. The Chico City council is comprised of just seven elected officials, including the mayor and vice mayor, which means the results of the election could radically alter the course of Chico politics.

Experience: Twelve years on Chico City Council, four of them as mayor of Chico, She is a long-time business owner and program manager for Chico State’s Community Action Volunteers in Education.

Schwab is an incumbent councilmember who was first elected in 2004 and has served on the council ever since. She has lived in Chico since 1975 and along with her husband owns Campus Bicycles, a bike shop in downtown Chico.

Schwab lists sustainability and economic development as focuses of her work. She has served in local governmental organizations such as the Sustainability Task Force and the Economic Development Committee. Additionally, Schwab served as Mayor of Chico from 2008-2012, during which the City of Chico was able to recover from $8 million in past deficit spending.

Experience: Four years on Chico City Council as vice mayor, he is a local business owner and property management professor at Chico State.

Morgan is up for his first re-election after serving one term as vice mayor on the council. He says he decided to get into local politics when he learned the Chico City Finance Staff was lying to the council.

Morgan works as a professor for the Chico State college of business. He is a Chico State alumnus with two undergraduate degrees and an MBA. Morgan also owns a local project management firm.

Experience: Four years on the Chico City Council, She is a certified mediator and counselor, director of Chico Youth Court and chair of Chico Internal Affairs Committee.

Ritter has served four years on the council and is up for re-election. Among her main goals for another term are fiscally responsible policy development and sustainable development.

Ritter advocates for the implementation of the Chico Climate Action Plan as well as the Urban Forest Management Plan, which involves hiring a city arborist.

Additionally, Ritter lists housing-first programs for the homeless and addressing the issue of over advertising alcohol as priorities for the future.

Stone has served four years on the council and is up for re-election. In his first term, Stone was successful in passing his Butane Honey Oil Ordinance, a version of which is now adopted countywide.

He also states to have championed the plastic bag ban in Chico. Notably, Stone voted for the plan to add two roundabouts to The Esplanade but reversed his decision after a contrast in public opinion of the plan.

Stone once bested Congressman Doug LaMalfa and several others in a pancake eating contest, according to his campaign website.

Experience: Director of Community Engagement at North Valley Community Foundation and he is chairman of Chico Police Community Advisory Board

Tricerri said that if elected, his first term would focus on public safety, business and a balanced budget, issues on which he claims to be reliably conservative.

He is interested in an approach to local politics that is “Collaborative, Bipartisan and focused on measurable outcomes,” according to an article in the Chico ER. As a co-writer of Chico’s police staffing plan, Tricerri wants to see Chico Police Department fully staffed.

Experience: Fifty-three years owning and operating a rice farm and is the chairman of voter registration and education for Chico Republican Women Federated.

Torres grew up in Chico, but moved a county away for 53 years to manage a rice farm. Since she returned to Chico three years ago, she has been heavily invested in Chico politics.

Torress said she switched from Democrat to conservative Republican 20 years ago. She wants to ensure a continuation of the conservative majority on the council.

Among her goals are to create a preservation district in downtown Chico and improve business development to increase the city’s tax base.

Experience: He is an entrepreneur and business owner.

Scott’s main concerns about Chico are revitalizing the downtown district and transparency. He believes that the significant transient presence downtown, as well as public attitudes towards new businesses, are decreasing traffic to the area.

Scott advocates for policy reform that would make Chico a business-friendly city. He also supports funding to increase police staffing and infrastructure development.

Scott takes issue with the transparency of salaries of local officials and disapproves of councilmembers who recuse themselves from votes, stating he would not recuse himself unless told to.

Experience: Eight years on Chico City Council, two of those as mayor, airport commissioner for the City of Chico, he is the former CAVE director and western regional director for Housing Assistance Council.

Karl Ory was mayor of Chico from 1983 to 1985. Even though he served two full terms on the council several years ago, Ory is once again seeking a seat.

He has 30 years of experience working with affordable housing and wishes to see Chico implement better affordable housing practices. Ory also believes in case management for individuals transitioning out of homelessness in order to improve success rates.

As the former airport commissioner for the City of Chico, Ory wants to boost the local economy and create jobs by improving air services in the area.

Macias, 26, is the youngest candidate this cycle. She wants to be the most progressive. As a young person with three jobs, Macias said she represents an underrepresented Chico demographic, those who are struggling to get by.

She believes homelessness in Chico is an important issue to address and opposed the 2013 Sit-Lie Ordinance which she said criminalized the acts of sleeping and resting for homeless individuals.

Macias said that the Chico Police Department is doing a good job, but would advocate for de-escalation training for police and paramedics.

Experience: She is a client service coordinator at Valley Oak Veterinary Center.

Duarte ran for council in 2012 and does not claim to be a politician, but she believes that the council could use some new voices.

She advocates for a city-sponsored homeless shelter that would provide relief and draw the homeless away from the commercial and residential districts.

Lucas Moran can be reached at [email protected] or @theorion_news on Twitter.