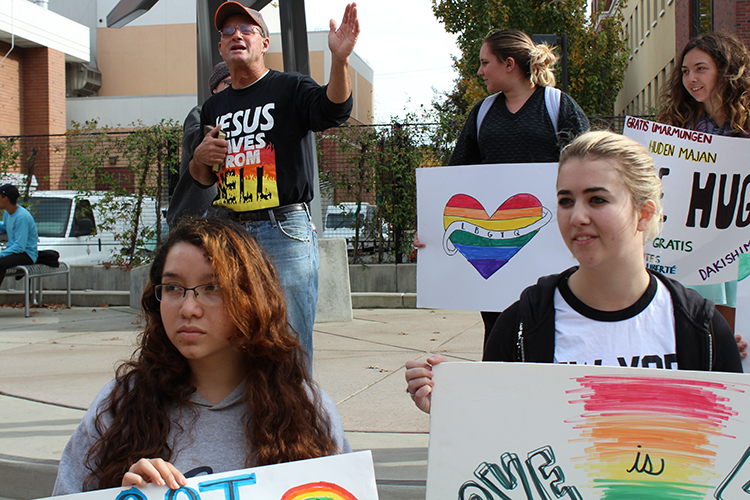 Students gathered around Trinity Commons Nov. 7 as a preacher advocated against the LGBTQ community.

The preacher, Brother Matt, was met with opposition from members of the Gender and Sexuality Equity Center. The protesters brought signs and created a barrier between him and the onlookers.

“We think it’s very powerful to protest in silence,” said the Women’s Program Coordinator for GSEC Rachel Biccum. “It kind of makes him seem less important and I think that’s really powerful to just to stand in solidarity with the community.”

People often come to campus to spread their religious viewpoints and are protected by the first amendment, according to University Police.

“It gets interesting because students react to it in various ways, almost everybody on campus is usually offended by what the guy has to say,” said University Police Officer Lane Conlan. “He stereotypes everybody on campus, gets the crowd riled up, in an effort to spread his word.”

University Police was at the scene to make sure the peaceful protest didn’t turn violent. Officer Conlan appreciated the way the GSEC reacted to Brother Matt.

“I think that they are the best-organized group that he’s verbally attacked out here, and probably the most intelligent in their response,” he said. “They’re not adding to the elevation of hostilities, they’re expressing themselves in a first amendment fashion.”

Brother Matt eventually left the stage after a student started to blast pop music through a portable speaker, drowning out the preacher’s words.

Brother Matt was unhappy with the response he received from Chico State students.

“I got doused with a drink, lemonade or something, I mean that’s typical with college universities,” he said, “rebellious and loud and just hateful.”

Brother Matt is a part of the religious group Consuming Fire Campus Ministries and has been a full-time preacher for 17 years. He travels around the U.S. to preach at college campuses.

“I was saved on a university,” Brother Matt said. “I was born again so the lord called upon me to preach and he called me back into what I was saved out of.”

This isn’t the first time Brother Matt or others from his organization have been to Chico State. In the past few years, every time someone comes to Chico State with his message, students band together to protest them.

Elizabeth Helmer can be reached at [email protected] or @lizzhelmer on Twitter.