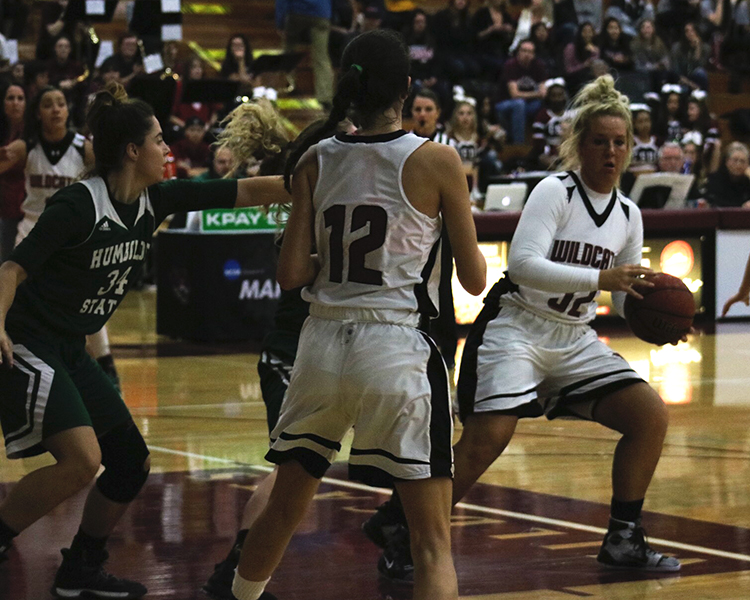 Junior forward Jo Paine attempts to pass the ball outside to a teammate on the perimeter. Photo credit: Jovanna Garcia

Altheles celebrate holidays on the court

While students are watching their calendars and counting down the days until winter break begins, basketball players at Chico State are practicing for their upcoming games.

Student-athletes don’t always have the luxury of going home to see their families during the season, according to junior forward Isaiah Ellis. Even athletes who are not competing over the holiday season have to sacrifice their break to practice.

“We didn’t really have any days off of practice since we practiced early Thanksgiving Day,” Ellis said.

Although the men’s basketball team is training through its break, Ellis said that he was able to return home for a short time, but chose to stay in Chico.

“I had the option of going back home and it was an especially good option for those didn’t live too far from Chico,” Ellis said. “A couple of guys from Sac went back home and being from Sac I definitely could have gone home too.”

Although, not all athletes stay in Chico for the holiday. Whitney Branham, a junior guard on the women’s basketball team said that she flies home for Christmas but returns the day after.

“It’s business time and we don’t care what holiday it is because we have committed to this team and to each other,” Branham said. “We also know that we have responsibilities that need to be taken care of.”

Although several of the teammates will miss their families, Branham said that the team is able to come together and celebrate holidays together.

“We have our own little version of New Year’s after the game we all watch the ball drop together and make the best of it. There is no better way to ring In the new year like a W,” Branham said.

Despite being held in Chico for the upcoming games on their schedule, the players are still able to concentrate on basketball and not their families, according to Branham.

“We just have to make the best of every situation,” Branham said.

Junior forward Jo Paine is new to Chico State but said that she understood the difficulty of going home during the season from experience. The stress of having a short time to embrace time off of school and work can be demoralizing, according to Paine.

“It can be hard to when you really don’t have any time off honestly,” Paine said. “You only get a small break to see family and relax.”

Despite the struggle of continuing to work through the break and missing the days off that other students enjoy, Paine said that she enjoyed improving her skills on the court during the time off.

“It’s nice to be able to hit the court and just focus on that, not tests or assignments that you have after,” Paine said.

With the season in full swing, it is hard to just pick your things up and take a week off of practice to be with family. The players need as much time as possible to practice for the upcoming games in hopes of making a deep playoff run this season.

These student-athletes are making sacrifice’s in order to make their team better as a whole and become strong contenders in their conference even if it means missing home for the holidays.

Jordan Jarrell can be reached at [email protected] or @OrionChicoJJ on Twitter.