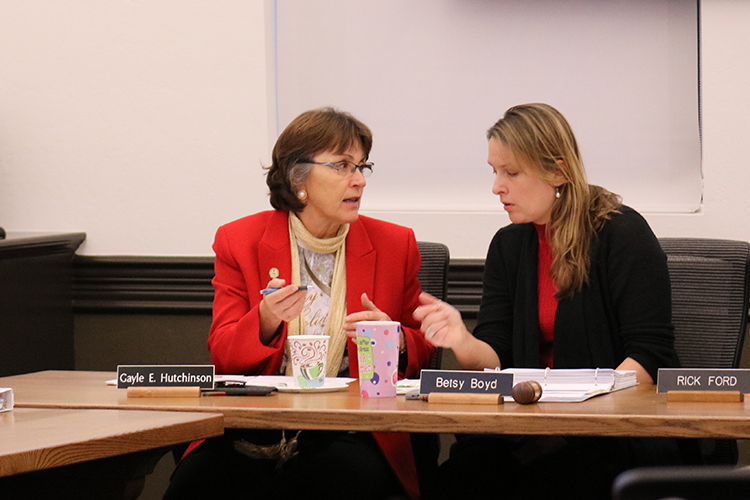 President Gayle Hutchinson concluded her 100-day listening tour on Dec. 2, and is now incorporating the feedback into her plan for the next academic year.

At the start of her presidency, Hutchinson promised to spend her first 100 days listening to students, staff and faculty to better understand issues on campus, and implement a plan to accomplish the goals stated in her fall convocation speech.

Throughout her listening tour, she held more than 65 meetings and received more than 347 responses to her campus climate survey. The office of the president is finalizing the meeting count, and the exact numbers will be included in the 100-day report that will be released in January.

“We have hundreds of responses,” Hutchinson said. “We have lots and lots of comments and information, which is really interesting to go through. People seem to really appreciate the opportunity to participate—students, faculty, staff and even friends of the university, people off campus—so it’s been good. I’ve learned a lot.”

On October 11, she released a 50-day report detailing themes she identified in her listening tour.

Some of Chico State’s strengths include “dedication to students and student success, appreciation of diversity, a beautiful campus and the university’s relationship with the Chico community,” according to the report.

“People are very much interested in continuing the things we do well like civic engagement and sustainability,” Hutchinson said.

As for some of Chico State’s challenges, Hutchinson identified themes such as “rebuilding morale and trust, persistence of party school image, changing student demographics and meeting their needs, and concern over use of limited resources.”

In the second half of her listening tour, Hutchinson received more feedback about challenges for students, staff and faculty on campus.

“Students have talked about concern for student food insecurity and housing,” she said. “Faculty have talked about that too and staff for that matter. I’ve seen comments about improving not only opportunities to get courses, but facilities too.”

Now that her listening tour has concluded, Hutchinson will incorporate this information into her strategic plan.

Civic engagement, sustainability and diversity will remain priorities for the university, Hutchinson said. “There may be others we move forward as well, it’s not limited. But those are definitely signature, if you will, of Chico State.”

“You’ll see that there are things we reaffirm with every strategic plan and that’s essential because that speaks to the hallmarks of who we are,” Hutchinson said. “But at the same time, as we look at where are students are today and where we know our students need to be in the future, that’s the even more exciting piece. So let’s think about what we’re doing well and if that fits with what our students’ needs are, let’s keep doing that. And if there are other things we need to be doing, then let’s have that conversation and then see how we craft that into a priority. So I’m really looking forward to this conversation.”