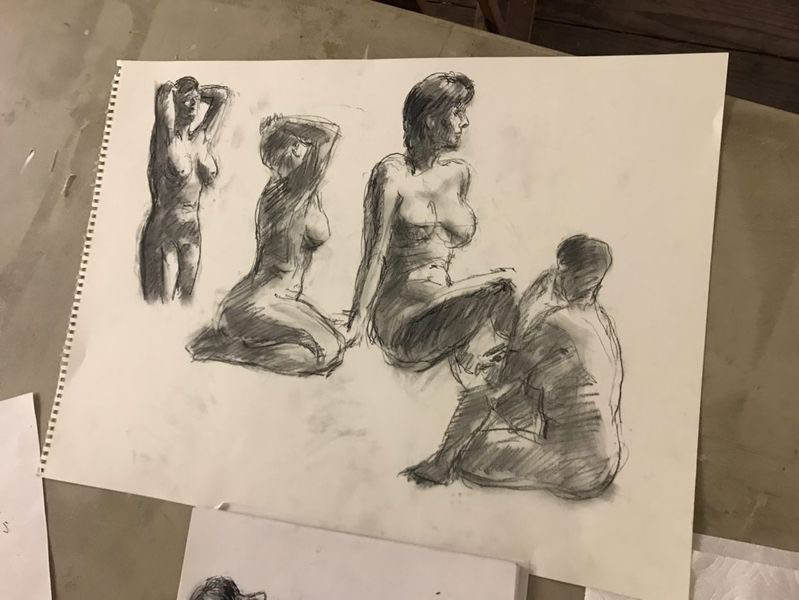 I stood in place on a platform covered in plush curtains and pillows. A space heater sent enough warmth to my chest to distract from the draft that attacked my rear.

I hold my arms in a ballet fourth position for two minutes. Lavender lotion wafts off my body so as not to offend the viewers with any odor I may have. A timer buzzes and I wordlessly strike another pose on the other end of the platform. My hands grasp my hair and my back arches, pushing my chest toward the ceiling.

The poses get longer as I move forward, incrementally increasing from five minutes to 15 to 30, all with varying degrees of difficulty. I shift to the floor and turn my back away from the people observing my form. I hold mock yoga poses and cringe as I feel parts of my body go numb where they have never gone numb before. But my pose never falters because keeping still is crucial to a job well-done.

No jewelry, makeup or accessories — including my glasses — are allowed for the duration of this session. My audience is nothing more than a group of blurred lines and edges in the dim plane of the room. My body is as bare and natural as the day I was born.

I am naked in front of four men who are hard at work recreating my image. I am a nude figure model.

An art model’s task is to present themselves in complex, creative poses so artists can master the shape of the human body or “figure.” Some models opt to remain clothed and pose for a portrait session, but figure models typically strip completely and offer their bodies to be a spectacle at all angles.

Having participated in both portrait and figure modeling, telling people I pose for nude sessions has garnered the most incredulity.

In a historical context, figure modeling has been crucial to our understanding of artistic concepts.

Looking at examples of Greek and Roman art, models were essential to accurately depicting the human form. Approaching the Middle Ages, art moved to abstract, religious concepts and the body was kept hidden. Figure modeling eventually became standard practice during the Renaissance, but only for the male form.

“If you walked back to workshops of the Italian Renaissance, you would find only male models,” Mitchell explained. “Even when the figure was a female figure that was being depicted.”

Michelangelo frequently used male models in his work and simply added breasts to the male form in order to capture the image of a woman.

Mitchell also explains that the primary use of male figure models for this time period was not out of shame for the female form. Rather, it was considered improper for women to pose nude among rough workshops.

The 17th century saw the normalization of female models, many of whom were sex workers and acustomed to being seen nude. The use of sex workers as models is what ultimately garnered this job’s sexual reputation.

“It certainly wasn’t the housewife who would tend to [pose],” Mitchell said.

Figure modeling as it’s known today may have partial roots in brothels, but the practice is far from pornographic. The difference lies between empowerment, objectification and intent.

“Model A,” an English man in his mid 60s, is a fellow figure model who has participated in nude sessions since his days in college. He believes modeling is a natural and introspective experience, but because of its wrongful conflation with pornography, he keeps this aspect of his life secret.

“I think most people think there’s a sort of perversion, but it’s not,” Model A said. “It’s for art, and for yourself it’s just a kind of confidence.”

An average figure session lasts for three hours, the majority of which is spent standing still. It’s a quiet and frankly boring experience to have your gaze fixed to one point for half an hour at a time. After the first few poses, the thrill of being naked dies down and posing becomes a meditative practice.

“It’s the chance to clear your mind and have time for yourself to think,” Model A said.

Aside from its perceived sexual nature, figure modeling often raises questions about the levels of vulnerability and the working relationship between artists and models. Some wonder why an artist would bother working with live models when photos would suffice.

Posing nude is as physically vulnerable as one can get, but that also fuels the relationships within a figure group. A nude photo won’t capture enough dimensions or angles in the same way a figure session can provide. The artist is unable to accurately portray the figure with photos alone.

As a coordinator with the Chico Art Center, Mark Gailey has worked with a number of different models for figure and portrait sessions. He establishes a professional environment and uses the given time to capture the personality and character that a model may exude.

“You see [models] in a number of different poses, so you really get a better feel for what their face or their figure really looks like,” Gailey said. “If you’re looking at one face in one photo, that’s just one take out of the whole set.”

Gailey has modeled for his own classes twice. After some last-minute cancellations, he spontaneously volunteered. Although he has worked with several figure models as an artist, he didn’t experience the role reversal until his early 60s.

The empowering aspects of this job come from feeling the body in a neutral state. The gaze models are held under is one of artistic merit. There are no other bodies or standards of beauty to compare in this field. We are subjects of art, not objects of desire.

Gailey encourages people of all ages, races, genders and body types to pose, but out of all demographics, he works primarily with young women. For every man that volunteers, there are three to four women inquiring about modeling.

“The artists love it if we can have a variety of age groups, a variety of sizes,” Gailey said. “Unfortunately, it seems that modeling for the figure group brings in generally younger models.”

The goal for a typical session is to allow artists to hone their skills in capturing dimensions, lighting, anatomy and character. A good model does not need to be young, thin, white, able bodied or conventionally attractive. A variety of models shows students a variety of real bodies.

To me, figure modeling is a liberating experience. I allow myself to be the center of attention for a few short hours. It’s given me a healthier relationship with my body and sense of beauty. The most rewarding aspect of the job is seeing the finished product.

My body is art and the drawings I am left with are testaments to that fact.

Michaela Harris can be reached at [email protected] and @MichaelaRH21 on Twitter.