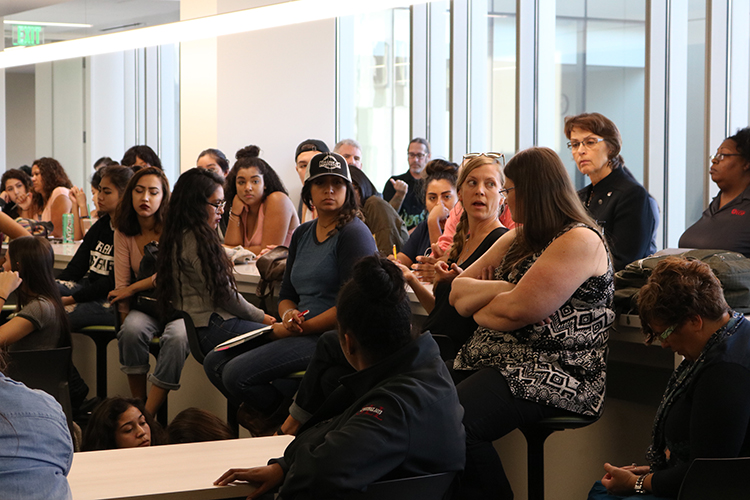 A mix of presenters and open discussion from students, faculty and community members filled the Arts and Humanities building during a two-day teach-in about black lives matter.

“I thought it would be interesting to reach out to colleges and have them demonstrate how they’re talking about these subjects in their classes and disciplines,” Butts said.

Butts originally planned for one day of teaching but drew enough support for two days instead. Faculty spoke about Chico State civil rights movements, environmental racism and ended the final day with an open conversation.

“For some students, I think the university is the first time in their entire life they’ve had the opportunity to experience diversity and diverse perspectives and encounter homophobia, racism, sexism etcetera,” she said.

If first-years could receive prior education about race and diversity, a gateway for discussion might emerge, President Hutchinson said.

Egypt Howard, the assistant program coordinator for Cross-Cultural Leadership Center, spearheaded the rally and sees an open door for conversations about people of color issues after the teach-in.

“I think one of the biggest outcomes of this is that we, the black community, realized there are a lot more allies on campus than we initially thought we had,” Howard said. “It gives us the opportunity to reach out to people when we need that support.”

Although no further teach-ins or rallies are scheduled, Butts says the conversation may continue in a different form.

“I think a modified version perhaps a lunch hour so people can have the ability to wander in and out (would work),” she said. “Setting a block of time once a month or maybe challenging the seven academic colleges to host (a discussion). Moving our way over from college to college.”

Jenice Tupolo and Jovanna Garcia can be reached at [email protected] or @jaytupolo and @Jo_Garcia19 on Twitter.